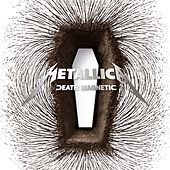 I’ve been a Metallica fan since Master of Puppets in 1986. The last 16 years have been a long wait for me. Metallica went mainstream and released records that just didn’t interest me much. St. Anger got played a couple of times before it was placed on the shelf to gather dust. It didn’t get a place on my mp3 players.

I saw the first reviews of DM. Metallica just as in the old days, excellent news. I noticed the critisism of the sound being pumping, none dynamic and distorted. Some days before DM I bought Whitesnakes Good to be Bad. It seems to have some kind of compression to gain a very loud level of sound regardless if there are few instruments there or the band is playing flat out. It doesn’t sound bad. I’ve been listening to it on my mp3 player coded in alt-preset-extreme with lame mp3 3.97. DM couldn’t be worse, boy was I wrong.

The music on DM is very good but the mixing or mastering kills the record completely. I received the cd in the mail and encoded it straight away and put it on my mp3 player and went out for a walk. Nothing better than a long walk listening to your favourite music. I had to turn down the volume because it seemed to be to loud compared to other music I listen to. I noticed some distortion on the first track, but it got worse. Just listen to the last minute of The day that never came and the track All nightmare long. By the end of All nightmare long my ears and head were tired of the extremely bad sound. It sounds like all the instruments are in a shouting match. Everything louder than everything else. Hi hat and cymbals gets pumped up and down in volume. Sometimes they sound clear and crisp and other times they sound muffeled. The sound is so caotic that I’ve yet to listen to the album from start to end. I can’t remember this has ever happened to me before.

You might say listening to it in a compressed, lossy format like mp3 is the problem. I’ve listened to the CD on my sound system of ok quality. The Mission speakers reveals the same that my Sennheiser head phones does. It’s not mp3 that’s the problem.

Metallica, please remix this album. It doesn’t deserve this kind of production. I dread to comtemplate how One would have sounded if it was recorded for this album.

This site uses Akismet to reduce spam. Learn how your comment data is processed.